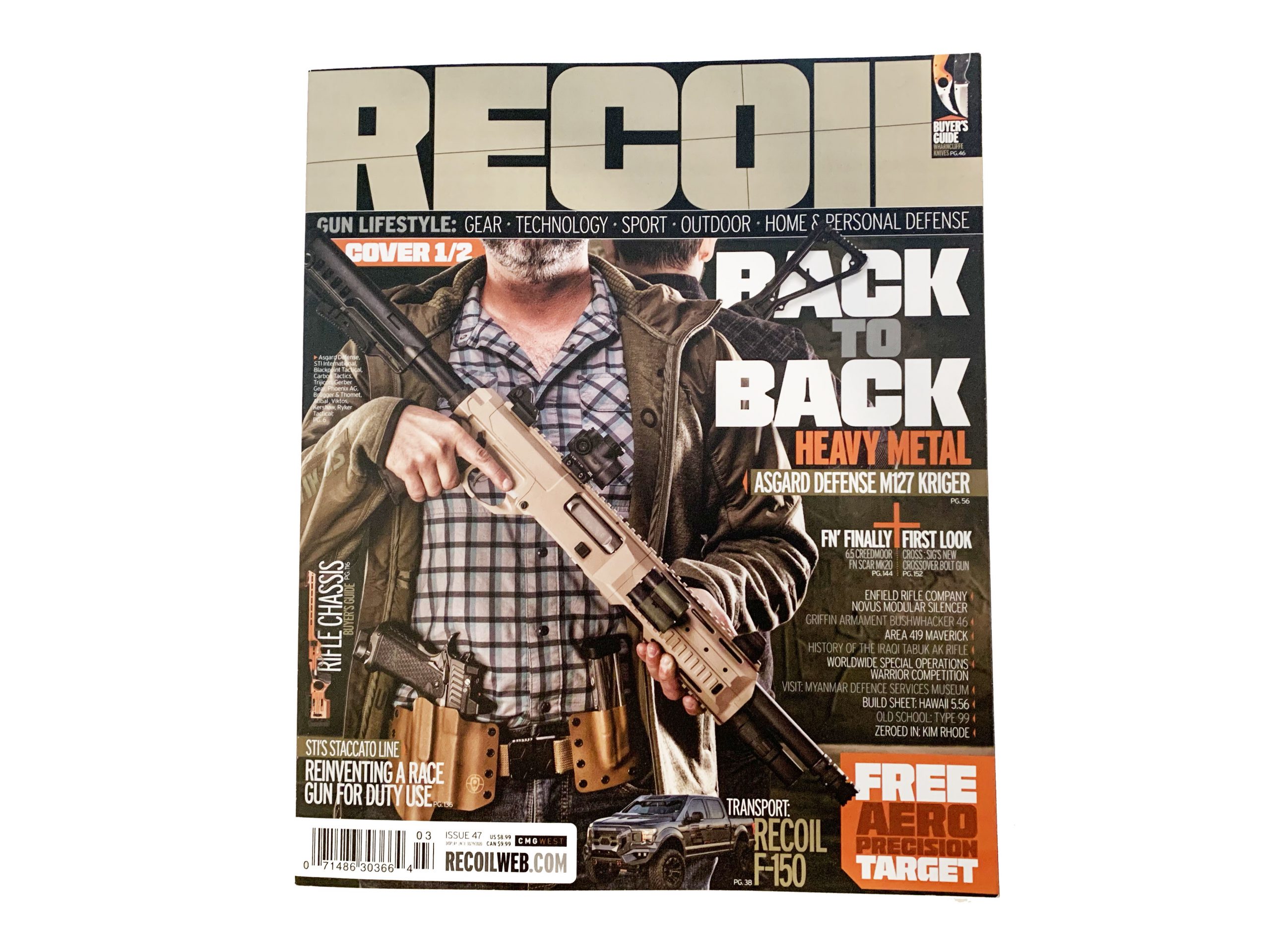 Recoil magazine wrote an article about the new Kriger M127 shotgun in early 2020. The Kriger was introduced on the cover of the SHOT edition, and we were able to attend SHOT and show off the shotgun. The article “Something New Under the Sun” was featured in the magazine. To read the full article, please click on the link below.

Something New Under the Sun

Our company’s initial focus was building accessory rail mounts for the popular shotguns on the market. At some point, the realization was that we could do better, starting with a clean slate to build an entirely new shotgun–one that incorporates some of the features that we built as add-ons. However, the first thing that needed to be established was the core design. It goes without saying that it needed to be rock solid, reliable, and it had to operate over a extensive range of shot shell offerings. The twin piston, short stroke gas system was the best solution to this wide operating range of pressures. The designs were complicated at first with lots of moving parts. Testing revealed that it just did not have to be that complicated. We found that using just two moving parts was the ticket. This gave us a couple of advantages. The first, developing maximum pressure for those few milliseconds needed to work the action translated into a very fast operating time–hence, higher cyclic rates. Second, once the payload leave the barrel, the venturi effect pulls the gasses and heat out of the the front of the barrel. This makes life much more pleasant if you grab the barrel after running several magazine tubes through the gun rapid fire. The next thing on the list was how to control the muzzle climb and recoil. We decided early on that it was not necessary to reinvent the wheel. That led us to the AR-15 buffer system. Instead of relying on a stiff hammer spring to slow down the rearward travel of the bolt carrier, we utilized a buffer and a spring in line with the bore axis. By using this dynamic approach, we gained the ability to tune the Kriger shotgun for different power loads by changing the spring rate. The direct benefits are

How to Break In the M127 Kriger Shotgun

The M127 is a versatile shotgun in regard to the wide array of shotshells it can run. However, with that being said, it has an initial break-in period to achieve 100% reliability. Break-in would be summed up as when the parts clearance themselves through repeated cycling and the springs take a set to their working height. You have probably noticed a bronze-colored grease on some firearms which is an anti-seize compound so that the firearm doesn’t weld itself together while breaking in. However, we use a heavy gun grease such as Lucas. As of this writing, ammunition has become hard to obtain. That will dictate on how to get the gun up to speed. On the low end of the power spectrum, it is best to steer clear of any loads that are less than 1 ⅛ ounce and velocities below 1200 fps. Use the yellow recoil spring if you are shooting the lower power ammo. It will be more than sufficient to handle even lower recoil 00 buck. When we test fire, we apply a heavy amount of gun grease to the bolt carrier, charging handle, and the hammer face. This helps with the lapping in of the moving parts. It is a good idea to keep it heavily lubed during the first 100-200 rounds. After the gun starts to loosen up, you can back off on the lube. We have guns that have thousands of rounds through them, and they run reliability with minimal cleaning and lube. On a side note, there is no one size fits all. If you feel excessive recoil, go to the next hotter recoil spring. We will go into more detail about spring selection in another post. Happy shooting!